As part of the wider Uniting Church, Kippax seeks to bring God’s vision of a reconciled world into the present, to reflect God’s love for everyone, work for justice and peace and follow the example and teachings of Jesus Christ who taught what it means to love your neighbour and your enemy, called on his disciples to heal the sick and give to the poor, and who himself challenged the systems and structures of oppression in his society. In all of this, we are called to act with integrity, ensuring that our words and our deeds are aligned.

In the past year, members of the Kippax congregation have joined in protests calling for climate action, justice for refugees and asylum seekers and the women's March4Justice.

We have also joined the Australian Religious Response to Climate Change letter writing campaign** calling on our Federal Government to take stronger action on climate change and held a forum as part of Uniting's Fair Treatment campaign which calls for drug law reform based on best practice and evidence, and treatment being available for all who seek it. 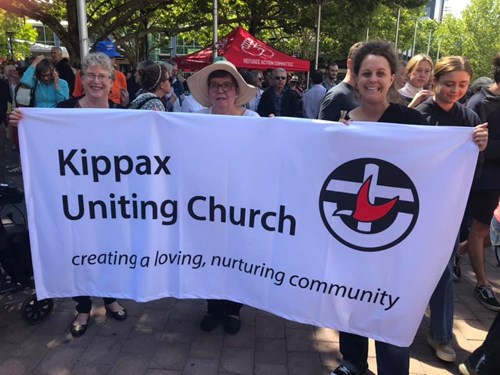 If you wish to share your opinion you absolutely can, but you should not expect to receive a response.  If you want to be heard and considered, ask questions that the Member of Parliament must reply to.

Be polite and reasonable. If you are ‘too passionate’, if phrasing and/or language is perceived to be inappropriate (and it need only be perceived by the reader as being rude, insulting or sarcastic) the correspondence is unlikely to be looked at responded to.

If your question relates to your opinion and what you think, for example, tax payer monies should be spent on improving staffing in age care institutions rather than the new development of the Australian War Memorial, you will likely be dissatisfied with the response that some poor public servant will need to write in response, and that the Minister, Member or Senator will read and then sign.

Here’s an example of how you might frame a letter to the Minister for the Environment Ms Sussan Ley:

Climate change impacts on coral reefs are predicted to worsen and critically affect the survival of coral reefs globally without the strongest possible climate change mitigation. 2016-2017 saw the Great Barrier Reef experience two consecutive years of severe mass coral bleaching. Sadly, there have been many years of issues before these years and after them.

The recent UNESCO produced report said Australia’s progress on the Reef 2050 Plan “has been insufficient in meeting key targets”.  They also stated that the plan requires stronger and clearer commitments, in particular on urgently addressing threats from climate change, and improving water quality and land management.

You have established a marine authority and spent millions of dollars on programs to mitigate the changes to the Reef, so how is it that we are not making progress?  How is it that you were so blindsided by the United Nation’s recommendation to list the reef as in danger?  Can you please advise me what argument that you put forward that made the UNESCO committee change their mind and not to list the reef as in danger?  What were the assurances you gave the UN experts?  And what were the politics you said had perverted proper process? And finally what evidence is there that Australia’s reef was singled out as you have public stated?

We clearly need to race to save this natural wonder that is in our stewardship.  Why is the Australian Government putting barriers in the way of doing this?