Season of Creation: Flora and Fauna

Reflection:  This is the Bramble Cay melomys (Melomys rubicola), aka Bramble Cay mosaic-tailed rat. On earth, there are over 2,200 rodent species comprising about 40 per cent of all mammal species. What's one rat? 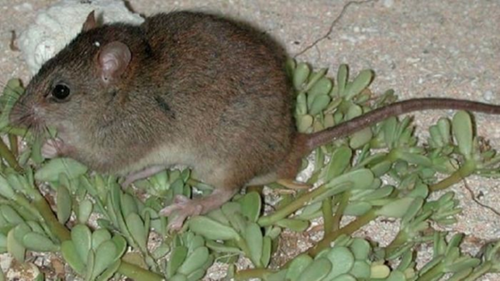 It is amongst the most insignificant of rats. It is not particularly genetically distinct from a number of other similar species of melomys. It's never been useful for any human project. We've never hunted it for fur or meat. No child has ever had one as a pet. No tourists have ever paid to see one. It may perhaps be considered the least of all mammal species.

Bramble Cay is its only known habitat. And this is amongst the most insignificant of islands. Just a few hundred metres across, less than 4 hectares in area, the cay is a tiny dollop of sand in the Torres Strait, closer to PNG than the Australian mainland. It is the northernmost tip of the Great Barrier Reef and the northernmost piece of land over which Australia claims sovereignty. And it is flat and basically featureless, never rising more than a couple of metres above mean sea level. No humans have ever lived on the island. It is amongst the least of all islands.

When tiny Bramble Cay was first discovered and named by Europeans in 1845, the little rats were so plentiful that the crew used them as target practice. A month later, another ship came and collected a specimen, which then sat preserved in storage in London for almost eighty years before finally receiving a formal scientific description from Oldfield Thomas in 1924.

In the 1970s, it was recorded that there were several hundred Bramble Cay melomys flourishing on the fleshy leaves of the scrub that holds the sand together. A 2004 survey found just a dozen. The last official sighting was in 2007. A fisherman who often visits the island says he last saw a melomys – just one – in late 2009. It was declared extinct this year.

Habitat destruction from ocean inundation was almost certainly to blame for their extinction: sea-level rise and the increased frequency and intensity of weather events producing extreme high water levels and damaging storm surges in the Torres Strait region over this period point to human-induced climate change being the root cause of the loss of the Bramble Cay melomys.

This creature is yet another item on the embarrassingly long list of lost Australian mammals, and is but one of the largely unrecorded marine species lost in the northern Great Barrier Reef during recent catastrophic bleaching events also caused by a warming ocean.

This insignificant rat is also a symbol for all the useless little species, the unknown earthlings winking out all over the place on a rapidly changing planet, whose lives and existence are precious to God and should be precious to us.

Today, we mourn the Bramble Cay melomys, a gift we were largely ignorant of having received, a creature whose loss doesn't threaten us, yet whose demise was our fault.

What creature will be mourning the demise of next?

So why should we be concerned about the demise of creatures like the Bramble Cay rat or some equally insignificant plant?  Well, to put it bluntly, nature, underpinned by biodiversity, provides a wealth of services, which form the building blocks of modern society – but both nature and biodiversity are disappearing at an alarming rate.  Despite well meaning attempts to halt the decline, we are failing: current targets and consequent actions amount, at best, to a managed decline.

Without flora and fauna, humans cannot exist. The flora generates and releases oxygen, which is needed by the fauna for respiratory purposes. In return, the fauna produces and releases carbon dioxide, which is needed by the flora for photosynthesis. It’s a symbiotic kind of relationship. Humans cannot get by without both flora and fauna. The oxygen that we breathe in comes from the flora, and the carbon dioxide we exhale is vital for the flora.

Also, humans benefit a lot from flora and fauna in regards to sources of food, medicine, and water. Our main source of food emanates from plant and animal species. Over 90% of medicine we use to cure diseases comes from flora. If it were not for the flora, there would be no water, which means we would not exist right now.

Animals also maintain the equilibrium across the board by predating on plants and other animals that could have otherwise exploded in regards to population. They also enable other rare species of plants to mushroom by pollinating other plants. Animal droppings are a source of fertilizer for plants and so it goes on.

Another great reason to care for our natural environment is that we humans love and appreciate nature – many of us feel close to God when we are out in nature. Statistics tell the story, each year, billions of people visit beautiful protected sceneries like national parks, recreation areas, indigenous forests, historic sites, wildlife refuges and wild and scenic rivers to experience the beauty of the landmarks.

Flora and fauna also contribute enormously to most world economies through tourism. For example, flora and fauna of Amazon attract numerous scientists and explorers. It’s estimated that the Amazon rainforest contributed about $50 million dollars to Brazil’s economy. Holiday locations like the Caribbean, Bahamas, Panama, Indonesia and so on attract more tourists than any country due to the widespread flora and fauna.  Australians flock to WA in spring to enjoy the amazingly diverse wildflowers.  A huge proportion of income for Qld is via tourists visiting the Barrier Reef now threatened by the warming of our oceans.

Deepak Chapra has written that Evil will be the Number One issue in spirituality of the 21st century.

We consider murder evil; and genocide very evil; but what about ecocide?  Some consider that ecocide is the greatest Evil of all, because it signals the death of nature as we know it, the extinction of millions of species, our own among them.

Right now we are witnessing one of the worst moments of ecocide ever.  The rainforest of Brazil, which not only contains untold special species of birds, insects, wildlife, plants, and medicines, but which accounts for 20% of the planet’s oxygen output and is busy cleansing excessive CO2 for the world, is burning like never before.

Since January, 75 thousand fires have burned in the forest representing an 85% increase over last year, and in the last two years the square acreage of miles subject to fires has doubled.  A million indigenous and other dwellers in the rain forest are affected and cases of pneumonia and respiratory emergencies have tripled.

I don’t know about you but I often feel overwhelmed by the challenge we have in front of us to repair the damage we humans have done to God’s good creation.

But in a publication from the WWF last year, Director General Marco Lambertini casts the challenge in a more hopeful light.  He says that ‘few people have the chance to find themselves on the cusp of a truly historical transformation.’   We do have this opportunity.

On one hand, we have known for many years that we are driving the planet to the brink.

On the other hand, science has never been clearer about the consequences of our impact. The nature conservation agenda is not only about securing the future of tigers, pandas, whales and all the amazing diversity of life we love and cherish on Earth. It’s bigger than that. There cannot be a healthy, happy and prosperous future for people on a planet with a destabilized climate, depleted oceans and rivers, degraded land and empty forests, all stripped of biodiversity, the web of life that sustains us all.

In the next years, we need to urgently transition to a net carbon neutral society and halt and reverse nature loss – through green finance, clean energy and environmentally friendly food production. We must also preserve and restore enough land and ocean in a natural state.

Few people have the chance to be a part of truly historic transformations. But we do. We have before us an unparalleled yet rapidly closing opportunity as we head into the year 2020, when the world will review its progress on sustainable development by means of the Sustainable Development Goals, the Paris Agreement and the Convention on Biological Diversity. This is when the world should embrace a new global deal for nature and people, and truly demonstrate the path we are choosing for people and the planet.

As people who claim allegiance to the creating and recreating God, we have a particular call to help shape the future that is good for the whole of creation.  Eco theologian Thomas Berry says that this can only happen when humans come to see their place and role in the universe as completely dependent on the habitats, flora, and fauna of Earth, all of which have intrinsic value not dependent on human needs or wants. Accepting this limited role is the first, and most difficult, step that we humans must take.

May God give us the courage to play our part.